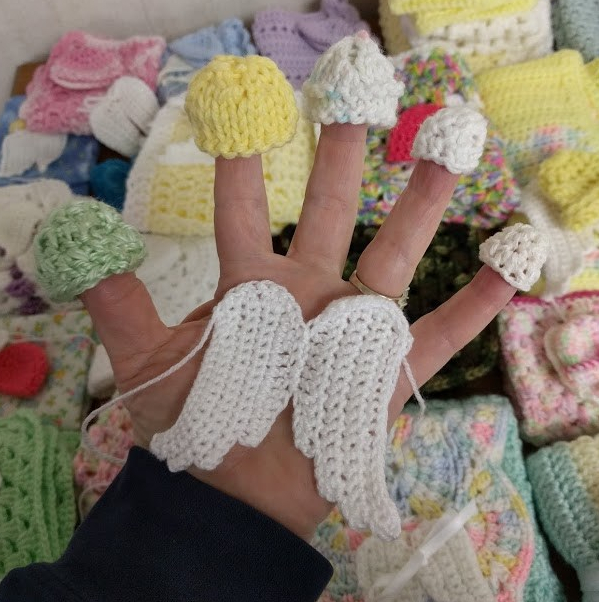 About four years ago, we received a package of hats from a volunteer who actually was local to our area. In her package, she had enclosed various sizes of hats. It is not unusual for us to receive various sizes of hats; however, what was unusual was that the sizing of these hats started at 4 weeks gestation. When we opened up the box we just sat and stared in awe at them. We were completely amazed at how tiny those hats were. At the time, we were sending out sets to bereavement photographers and hospitals. Most hospitals have rules about how far along you have to be in order to be in the Labor and Delivery Unit (at that time it was usually around 16 weeks) and although some bereavement photographers will not take photos of babies younger than about 16-18 weeks gestation, many won’t take pictures of babies less than 22 or 23 weeks gestation. Because of these rules, we were only sending out sets as small as 14-16 weeks gestation.

Fast forward a few months later: We received an email from a woman asking if we had anything that was 12 weeks sized for a friend of hers who had just lost her baby. Well, thanks to the woman who had sent us those tiny hats, we sure did and we were able to match up a 12 week gestation hat with a blanket we already had on hand and we sent it off to this grieving mother.

A couple of months later, I had a very dear friend who lost one of her twins at 8 weeks gestation. I was able to get out our 8 weeks gestation baggy of teeny tiny hats to send her something special.

A couple of weeks passed by and we had another request, but this time it was for an angel lost at 7 weeks gestation.

That is when we realized the overwhelming need for these teeny tiny hats, blankets, and angel wings.

When Project Robby started, our goal was to send hats to hospitals and bereavement photographers, but that mission overlooked a whole group of women who have also lost their babies. Many of these women might not have gotten to hold their baby in their arms, but that doesn’t make their baby any less important.

Your baby is important no matter how long you carried him/her.

We are honored to offer Keepsake Sets to women who have lost a baby no matter how early because we truly believe that all babies are special no matter how tiny, premature, or brief their life here on Earth. ♥